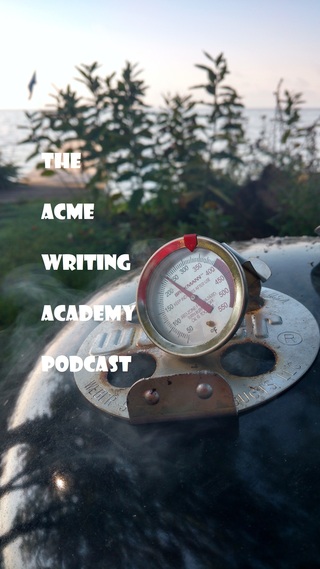 Listen to ACME Writing Academy podcasts on writing and the writing life. Produced by Mike Magnuson and Rick Krizman.

A short story for our times

"Sorry to throw this at you, gentlemen, but the Office was flooded this week with urgent calls for a meeting to discuss the New Pitch. Looks like we've got pretty good attendance here, for a last-minute thing."

"Owner reps from all but one club, Commissioner."

"Well, everybody likes a breakfast meeting.  Jet in, jet out. Wait. Is that Cookie 'Krumz' Krzscrmwieczski, Manager of the Blank City Blankity-Blanks?"

"Impressed you got my name right, Commissioner—and you're not even from Milwaukee!"

"Correct me if I'm wrong, Krumz, but wasn't it you and the B/Blanks that introduced the New Pitch to the majors?'"

"Damn right we did. We had a pitcher throwing it for over a year before some egghead put it on YouTube, so that every pitcher of sufficient size and finger length could learn to throw it, which is not all that many pitchers, I hasten to add, but at least a few and more of 'em every damn day. Now I would be the first to admit that my feelings on this subject have been intensified by our tragic loss (just last month in a rock-climbing accident on Madagascar) of the first pitcher ever to throw the New Pitch, but that doesn't change the reality of what is happening today.  Instead of talking about 'risks and ramifications' of the slowest pitch thrown in the majors, I believe we should be putting the kibosh on these New Pitch training videos that are promoting at absolutely no cost whatsoever what ought by rights to be a trade secret."

"A question for Manager Krumz."

"The Office of the Commissioner recognizes Dr. Polk A. Dot, majority owner of the Ellipses. Dr. Dot?"

"Thank you.  Do I understand you to say, Mr. Krumz, that the New Pitch is proliferating?"

"Ah—yes, I believe it is, and as you can see by the way he's nodding his head like a bobble-head doll, my pitching coach Red Hotz agrees."

"And do you and Mr. Hotz also agree, as this stack of officially registered complaints would suggest, that to hit the New Pitch is, in a word, impossible?"

"Twirls around and scoots through the zone every time.  It's a sweet pitch, Dr. Dot."

"Theoretically, then, if opposing teams each have at least one pitcher capable of throwing the New Pitch with some consistency, we could find ourselves in a game that cannot move beyond a score of 0-0, no matter the number of innings?  A mutual—and perpetual—no-hitter, as it were?"

"Commissioner, can you imagine what will happen to attendance as fans begin to notice that baseball games have become literally interminable?  We could be looking at the end of baseball."

"The Office of the Commissioner of Baseball recognizes—actually, I don't recognize you. How did you get in here?"

"I'm Ms. Anonymous Posh of Knight-and-Day Stock Apocalypse. I came in with the caterers."

"Anonymous Posh!  Are you the one who—?"

"Including your absent owner, Manager Krumz.  I am here, gentlemen, to add two facts to the fire.  Fact #1:  Although it's extremely unlikely that anyone will ever hit the New Pitch, statistically speaking, it is possible to hit."

"Quiet, Krumz.  And may I ask how you came by this knowledge, Ms. Posh?"

"I know because I invented it, Commissioner."

"You invented the New Pitch?"

"It might be more accurate to say that I first described it, which amounts to the same thing.  You see, I design trading algorithms—you know, the kind that allow internet investors to make thousands of previously nonexistent dollars per second off lightning-fast trades executed by computer programs written by people like me?  That kind.  I'm not trying to make excuses for myself, but you can only spend so many hours a day inventing ways to pile up nonexistent dollars before your grip on reality begins to weaken. Your boundaries break down.  Your judgment tanks.  Some people even hallucinate.  We had a guy on third floor who put on a Hazmat suit and went around spraying all the servers with Raid."

"And the relevance of this, Ms. Posh?"

"To counteract delusional thinking, daily reality breaks are required for all employees at Knight-and-Day Stock Apocalypse.  It's company policy.  You may be pleased to hear that Knight-and-Day specifically recommends watching Major League Baseball for reality break purposes, the idea being that by the time you've watched the same play four or five times from as many camera angles, and in slo-mo, you know for sure what really happened.  I was watching a game on my computer one day last year when I happened to see several different views of Manager Krumz's late great starting pitcher throwing a pitch I'd never seen before. In slo-mo, it looked like he was twisting a doorknob! I spent my subsequent reality breaks over the next few weeks describing what I had seen the only way I know how. In code. I ended up tweaking the pitch—made it a tad more unhittable—in my algorithm, which I shared with Manager Krumz and his pitching coach. I have to admit I thought I might score some skybox passes, professional courtesy and all."

"We thought she was a nutcase at first, Commissioner."

"I knew, of course, that the code wouldn't mean anything to Mr. Krumz and company, so I linked up with a CAD."

"To make the animation.  The guy works in my building.  That's what I felt the most guilty about, at first, moonlighting like that, on company time.  I am the first and only woman programmer at Stock Apocalypse so I have a certain standard to uphold and I do feel that I may have let my (future) sisters down.  Then I started to think about the game, which I have come to enjoy quite a lot, and how the new pitch might ruin baseball, just like you said, Dr. Dot.  The CAD guy was feeling guilty, too.  He started sending me video clips of Sandy Koufax and Warren Spahn, telling me to 'Program that!'  And after the New Pitch video went viral, he really lost it.  Sent me all kinds of weird stuff.  The Oppenheimer speech about the Bomb changing the world forever—have you ever seen that?  It is spooky.  I thought, why is he sending this?  It's not like we're killing anybody.  And that's when I heard from my other friend, the physicist. He's the one who discovered the fatal flaw."

"The New Pitch has a fatal flaw?"

"Oh, come on, Ms. Posh.  How can a ball going that slow kill somebody?"

"It wouldn't, Manager Krumz, not on its way to the plate."

"Well, the damn thing's impossible to hit, so when--?

"Not impossible.  Remember Fact #1?  It's extremely unlikely that anyone will ever hit the New Pitch, but if someone does, well, my physicist friend has determined that the trajectory of the ball, after it's been hit, will always be the same."

"It will kill the pitcher."

"The ball will always kill the pitcher."

"You're sure about that?  Can we see some stats or something?"

"I could put the algorithm on screen here.  It takes nine days to scroll through it."

"But you're sure about this pitcher thing?"

"It will always kill the pitcher. That's Fact #2."

"Well, in that case, there's no need to ban the New Pitch."

"But I've just told you, Commissioner, it's a lethal weapon!"

"Precisely, Ms. Posh.  That's why there's no need to ban it.  No pitcher will throw a pitch knowing that, if somebody hits it, he dies.  Once known—and I can see by the bowed heads of our owners that the word is already going out—the possible effects of the New Pitch all but guarantee that nobody will ever throw it."

"Are you sure, Commissioner?  What about a pitcher who loses his stuff right before free agency?  Or a starter who's stuck in the bullpen?  Shouldn't you ban the pitch on principle anyway?  Take a stand against it?"

"A ban would be unenforceable, Ms. Posh.  Can you imagine the cost to the organization?  A physicist on call to analyze every change-up?  Official reviews nine days long?  I don't think so.  The New Pitch is its own best deterrent.  Wouldn't you agree, Manager Krumz?"

"Of course I am.  After all, the New Pitch might win some games, but if it takes out your ace, it could cost you the season.  Right, Krumz?"

The Cailiffs of Baghdad, Georgia
A hidden history of the South emerges when a worldly teacher leads Threestep, GA, to reinvent itself, setting in motion events that lead to triumph and tragedy for a black teenager who happens to be the smartest person in Piedmont County, Georgia.
The Turk and My Mother

Self Storage and Other Stories
In these nine stories, “the familiar world is both funnier and sadder than it seems.”
--Kalamazoo Gazette
A Different Plain
Short stories by Nebraska writers edited by Ladette Randolph, with an introduction by Mary Pipher

In the Middle of the Middle West: Literary Nonfiction from the Heartland
A rich and comprehensive collection of literary writings about the Midwest.
Loading…}